Gilead is an Arizona artisan who specializes in fantasy and science fiction paintings with a classic pulp impression, often using 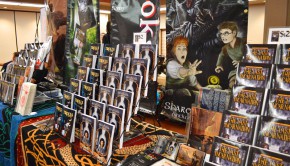