You can help Arizona’s homegrown super-team, the ‘Arizonauts,’ to fight the bad guys and save our state from dirty politicians 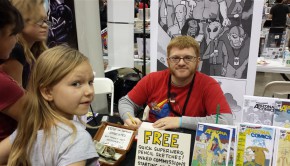